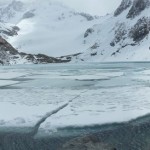 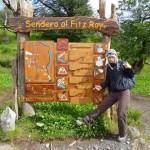 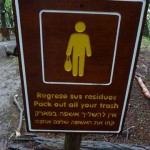 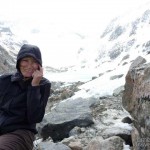 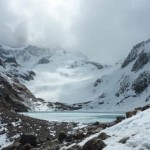 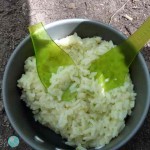 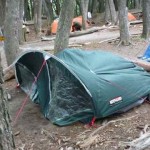 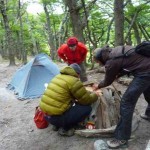 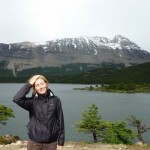 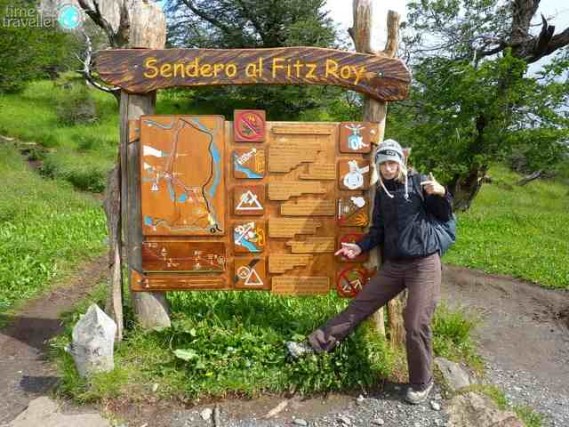 After 32 hours on the road we staggered off our Route 40 bus at 6am into the rain, fog, and icy cold winds of El Chalten.

El Chalten is a small town in Patagonia in Argentina, about 3.5 hours north of El Calafate. It is set at the top end of Parque Nacional de Los Glaciers and is famous for Monte Fitz Roy, the jagged peak of which can be seen stretching skyward out of the national park on a clear day.

I had been told by other travellers heading north that this national park had some of the most breathtaking views known to man. So I remained hopeful as we set out on day one in heavy fog, wrapped up in a down jacket and under an ever threatening grey sky.

We had chosen a path less travelled and headed north first, hiking along side Rio Electrico to a small camp site called Piedra Del Fraile, to catch a glimpse of the north side of Monte Fitz Roy. It took only two and a half hours to reach the camp site, walking through fairly flat terrain. When we arrived at the camp site we payed 30 Pesos each to pitch our tent (a little on the high side for a camp spot, but ok). We did a short walk out to a large turquoise green lake and a small glacier and caught only a tiny glimpse of the surrounding mountains through the thick cloud. It was beautiful, yet the north side of Monte Fitz Roy was still no where to be seen.

The next morning was Christmas Eve, and I woke up excited for the elusive spectacular views I had been told about. Surely they’d come out to play today. I had a quick chat to the couple running the camp site who tried to let me down gently with the news that rain, thick cloud cover and icy cold winds are the rule, not the exception, in the area surrounding Monte Fitz Roy. The breathtaking views do exist… in the sunshine, which is a freak occurrence and nothing more.

With that we set out for day two, the first two hours of which were back tracking the way we had come the day before. I’d been spoilt by the heart pounding views that merely laid themselves out before me on our hike in Parque Nacional Nahuel Huapi outside of Bariloche, that I’d forgotten the hard work getting to these locations usually takes. 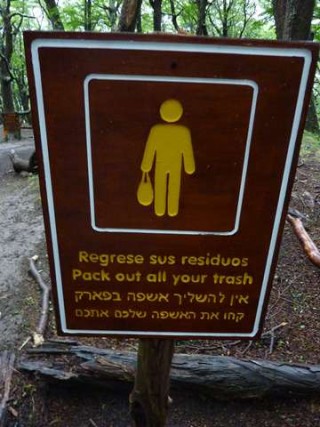 After a four hour hike and passing by a small yet beautiful glacier, we reached our next camp site called Poincenot on the Rio Blanco. We were greeted by an array of pitched tents and a sign saying “Pack Out Your Rubbish” in Spanish, English… and Hebrew.

As we were pitching our tent who would walk into the camp site but Yann and JB, the two guys we’d met on our last trek and who had also shared the Route 40 bus experience. It really is incredible how you cross paths when travelling, even in the most remote of places. They had brought a small carton of red wine with them to celebrate Christmas, so we set a date for a little later in the evening and set out to climb up to Laguna de Los Tres.

Laguna de Los Tres is an additional hike which takes about 1.5 hours each way, it seemed easy enough to me. Now, the problem with hiking with someone who’s so experienced is that you rely on them and tend to become complacent. If I’d bothered to look into the walk in more depth, I would have found that it’s a steep hike up a mountain with dangerously strong winds that you should really only do with proper hiking gear. So the last 25 minutes of the hike saw me crouching on the ground, clinging onto large boulders to avoid being blown off the mountain by the strong gusts of icy wind. The thought of carrying a large heavy rock up the mountain just to weigh myself down crossed my mind on a few occasions. 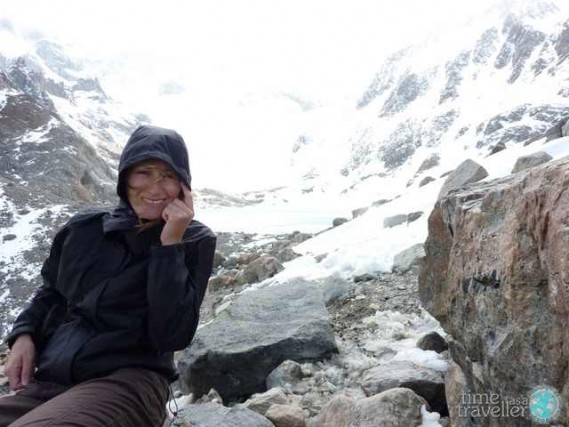 Braving the storm on the mountain 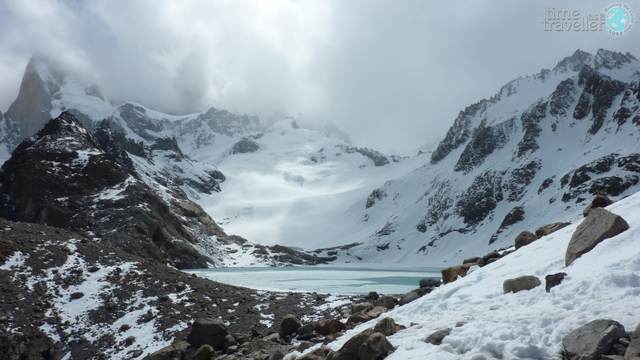 Through a series of stop starts, intermingled with the ‘crouched on ground clinging to bolder’ move, I was at the top. The wind was incredible, it ripped straight through me. But the view… the view was spectacular. For a brief second I caught a glimpse of the jagged summit of Monte Fitz Roy before the clouds swallowed it up again. Finally, a glimpse the elusive summit. If it weren’t for pictures I’d have thought it was mythical, but crouching behind a large boulder I’d finally seen it with my own eyes. And yes, it was worth it.

And with that it was time to head down the mountain. I surprised myself with the nimble moves of a mountain goat, motivated by thoughts of hyperthermia and waking up wrapped in tin foil, I’d never moved so fast in my life.

That night we had packet risotto for dinner. It was the last meal for Spooney-Forkey, my 2 in 1 plastic spoon fork from Kathmandu. He broke mid stirring-motion in the thick rice. It was a sad moment… I’d always thought of Spooney-Forkey as indestructible, with his harsh floresent yellow exterior… 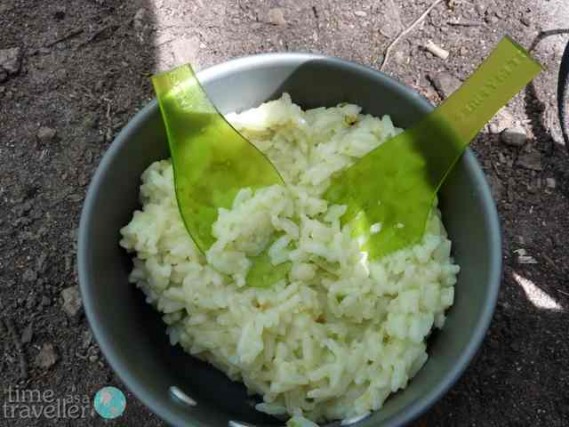 A bitter end for Spooney-Forkey

While I mourned the loss over a warm red wine with JB and Yann, the small empty camping space beside their tent was taken by a large group of weary eyed travellers, who didn’t seem prepared for the night out in open Patagonia. We watched them for a while… then we were faced with an unusual question: “How many travellers does it really take to put up a tent?” I had thought it was the same as normal range, one to two depending on the size of the tent… but I was wrong. Apparently tent assembly isn’t the innate skill I had thought, and so often taken for granted.

The answer is not ‘one to two depending on the size of the tent’ but actually… eleven. About eight to ten stood around in an apathetic haze, while one poor guy tried to actually do something about it. It took over an hour and the finished product looked more like a cake without the self-raising flour. The fly was tied down to boulders, squashed beneath was a tent with one pole in the front and a big dint in the top, perfect for pooling rain water. We watched, waiting for them to ask for help… they didn’t… we kept watching. By the end we could see the heads of five people sticking up from under the fabric, and we looked at each other with concern, knowing the cold that would set in. We wanted to offer the poor guy who had tried to assemble the tent shelter in ours, but you can’t offer one without offering all. So we silently wished them all the best for the night ahead.

With the entertainment for the night over I rolled into my sleeping bag on Christmas eve, and listened as the fierce wind blow branches off trees and the rain poured down. 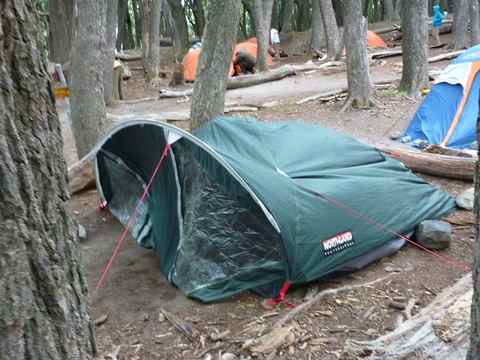 Christmas morning we awoke to find a puddle of muddy water out front of the tent, and our neighbours gone. We got dirty and wet pulling the tent down, and walked the two and a half hours back to El Chalten in the rain. Monte Fitz Roy really was putting on the weather for us. Arriving back at the hostel and a hot shower had never felt so good. 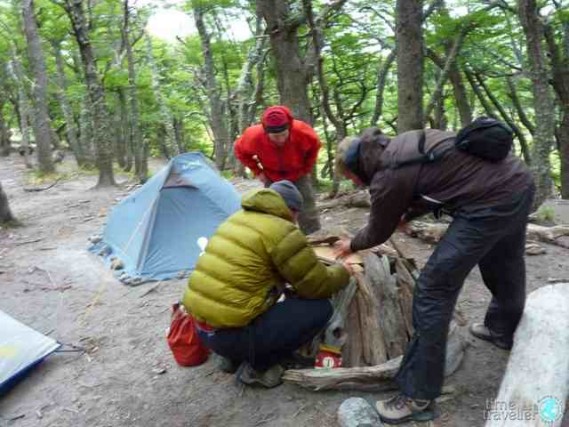 The boys making a wind break for the stove

We spent Christmas night in the company of other travellers in the lounge of our cosy hostel Aylen-Aike. We took turns using the kitchen while watching ‘The Police Certifiable: Live in Buenos Aires’ (in which I noted Sting appears to have aged remarkably well), and toyed over the idea of backing it up with David Bowie Live. Christmas was not mentioned. Not once all evening, yet everyone seemed to enjoy the company of others and the cosy atmosphere.

I guess it’s the perception of time. On the road special days tend to loose their meaning. Every day is a new and exciting experience… a holiday, a celebration, a time to relax… an adventure.

a little piece of beautiful…

That night we hung out out sleeping bags and clothes to dry everything off and I rolled into bed looking forward to my morning sleep in before taking a bus south to El Calafate the following afternoon. Little did I know the night was far from over, and not in a good way.

At about 1am, the lights were out and I felt a bite above my right eye. I thought nothing of it and tried to sleep again. Then the right side of my face became itchy and I felt three bites. I sat up and switched on the lamp to see a little black bug scurrying off across the wall. Bed bugs. There were about 10 big fat black ones scurrying around the walls and over the beds and tiny little white ones on the pillows in this nice, cosy, clean hostel. I freaked out, and with everyone else asleep there was no one to share the experience with. I looked around the room, we had sleeping bags and clothes hanging around the room drying from the hike… our things would be infested. I changed my clothes, found my silk liner and went to sleep in another bed across the room, curled up inside the silk sleep liner holding the opening closed around my head. I remember opening my eyes at one point and seeing a bug crawl across the top of the liner, and faintly remembered a fellow traveller once telling me that they thought silk liners were a farce that were of no use. I was quietly happy that I’d never taken that person’s advice, and thanked the universe for silk.

My idea appeared to work. I woke at 7am with no additional bites, and it turned out that two others in our room had the same problem and quickly checked out of the hostel. Apparently not everyone gets a sudden reaction from these little buggers like I did, and I was one of the lucky ones… you see if I hadn’t I would have woken up in the morning riddled with bites.

The next morning we spoke to the manager who didn’t really care and said he’d spray the room later. His idea of fixing the problem was washing the sheets of who ever had complained, and then asked us to see if we could find any more in the room. He laughed when we said that they only come out at night. Hmmm, I had the sneaking suspicion this had happened before. Now having to find a place to wash every item in our packs, we were out of there, and jumped the first bus to El Calafate… 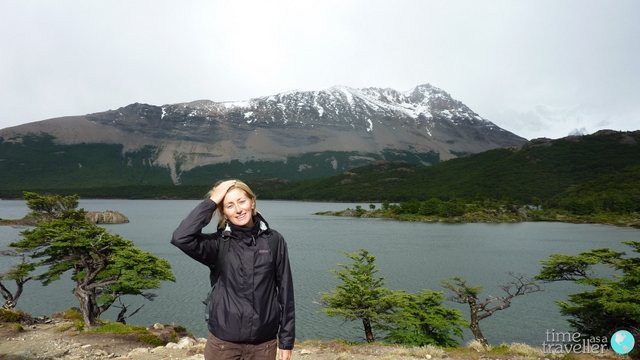 Uyuni and The Salt Flats
On Arriving – Santa Marta, Colombia
Route 40 Patagonia – Join the Joyride
The Magic of Buenos Aires