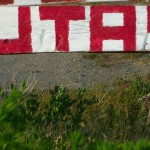 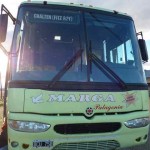 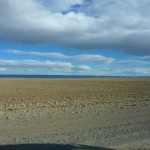 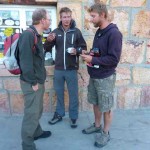 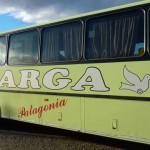 This blog post is dedicated to the original Doughnut. You and your pink sun visor would have made this ride that little bit more special.

The long and winding road… very long and very winding.

Route 40 stretches south from Bariloche, hugging the Chilean border. Its a long stretch of winding road through flat desert, most of the road is dirt track. I’d been warned about Route 40, everything from it being the slowest and most boring bus ride known to man, to “Don’t do it even if your life depends on it”. Not a comfortable ride by any stretch of the imagination.

But a comfortable ride is not what I was looking for, give me the experience. “Don’t do it even if your life depends on it”?? Yes, I’m in.

So I paid my 360 Argentinean Pesos for a 32 hour bus ride on a dirt track, south from Bariloche to El Chalten. 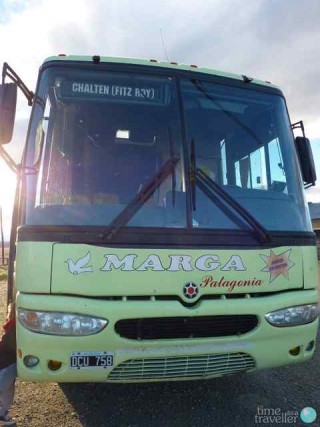 We had a good team. A French guy named JB and a Swiss guy named Yann who we’d met at Refugio Jakob whilst hiking outside of Bariloche, an English girl we’d met in the street who had pointed us in the direction of the ticket office, an Australian man from Brisbane who’d given his children the comfort of a flight while he took the long bus ride with us, and what would a good South American bus trip be without a group of 45 friendly Israelis fresh out of military training. (Ok slight overstatement, maybe there were 10, but you get my drift.) A surprisingly lovely bunch.

Our Team Leader, the second driver. An unexpectedly cool guy who wore his sun glasses on the back of his head. If Argentina did tight white bonds T-shirts this guy would be wearing one, and he’d have his cigarettes tucked under the short sleeve. He walked down the bus asking were we were all from. The only English words he knew were “You British? Get of my bus, get off my bus now!” followed by a cheeky grin. In was clear from the start that his guy had brought a big bag of fun along for the ride, and I was intrigued.

We headed out at 9pm. I was set with my two food bags and down jacket. One thing I’ve learnt from long-haul bus trips in South America is that you can never have too much food or warmth. It doesn’t matter how hot it is outside, inside the bus it’s 99% likely to be sub-zero temperatures. So I settled in, watched 3 episodes of Heroes on the iPod, and finally fell asleep under my jacket with the hood over my face.

I remember partially waking up at sunrise, I peered out the window hazy eyed to see a beautiful sunrise which turned the sparse desert pink as far as my eyes could see, before passing out again curled up in my seat with a small smile on my face. At 9am we were treated to an old-school techno music wake up call, which included Team Leader Fun Bags doing a little dance at the front of the bus. Bus ticket plus entertainment. Who ever said Route 40 was boring. 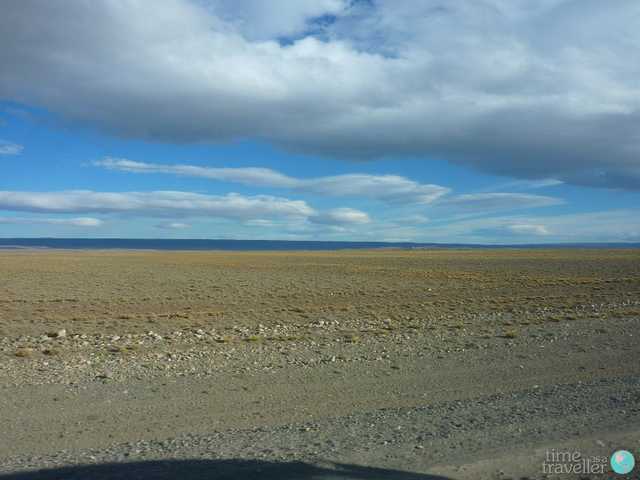 We staggered from the bus at a random stop in the desert and queued for coffees, which were made by a small lady with an amazing perm. A perm so good it could have been my mothers. This gorgeous little lady was adamant that she take each person’s take away coffee out on a tray, it was just so cute.

I continued the rest of the morning drifting between watching Tropic Thunder on the small box tv, listening to an assortment of Empire of the Sun and MGMT tracks, and watching the arid landscape go by. There is just something about long-haul travel by road that I love. 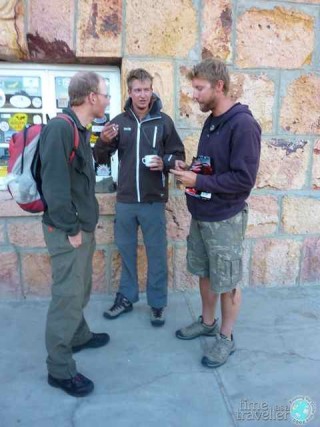 At about 1pm we stopped at a tiny bus station in the middle of nowhere and were told to get all our gear together to change buses. No worries, sounds easy enough. Only the bus we were changing onto wouldn’t be leaving until 5pm. That’s a four hour unscheduled stop in the middle of nowhere (which actually turned out to be Perito Moreno town, which, apparently, is the next closest town to ‘the middle of nowhere’). A month ago this sort of thing would have unsettled me. Now I just roll with it. I had my bag of food and the bus stop had shelter, a toilet, and the company of about 30 other travellers.

During those 4 hours, as my 2 food bags slowly diminished into one, I thought of tips I may give to others travelling this same road. I came up with these: take toilet paper and your tooth brush on board with you, don’t be afraid to take more than one food bag, and turning your underwear inside out can be considered the same as putting on fresh ones when the bus trip exceeds 24 hours. There you have it. Obviously not my most shining moment of clarity, which signalled time to get moving again.

It’s now 9pm and we’re on bus no. 2. Every now and then we get lucky and break out onto a paved road, if only for a short time. Our team leader has had to take his turn driving, so the joy has toned down a little (aside from his photo shoot session at the dinner stop and a brief rendition of Roxette on the loud speaker).

For me Route 40 has been a quite the experience, one that I wouldn’t swap for a quick flight. Yes, the thought of being on a bus for 32 hours down a dirt road is a daunting one. But life is more than the mere span of time, it is the sum of your experiences.

There’s a lot to be said for travelling by road, it gives you time. Time to get your thoughts together and time to take in one place and be ready to move onto another. And if during that time you also get to meet some good people and watch a middle aged Argentinean man do a rendition of Roxette with his sun glasses on the back of his head and his cigarettes hanging out the front of his shirt, then all the better.

So now I kick back, get cosy, put my ear phones in, and watch the sun set over the horizon as we drive at 30kph down the long and winding dirt road that is Route 40… 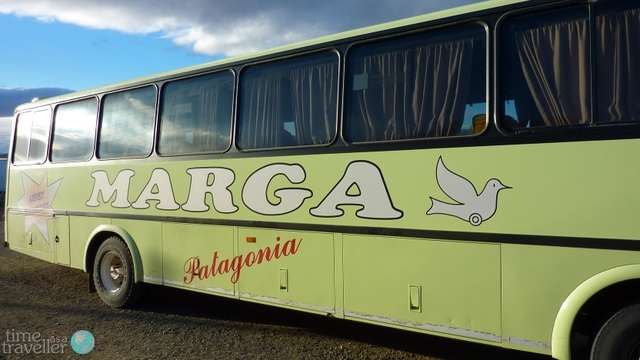