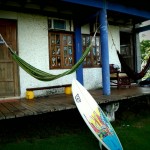 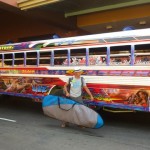 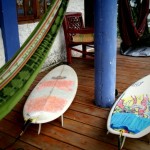 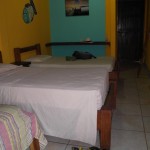 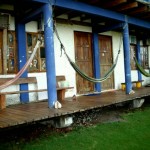 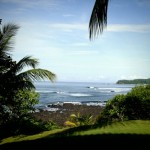 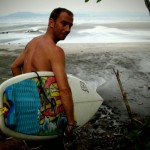 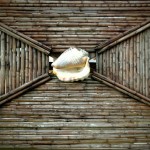 Surf. It is the major part of our adventure. So after the flat Caribbean oasis of the San Blas Islands we headed out of Panama City toward the pacific coast of Panama.

Somehow Anthony works his magic and fits them in sideways inside the taxi, as long as no one makes any sudden movements, including the taxi driver. We make it to the bus terminal with ten minutes to spare. A bus driver sees the foreigners with the surf boards, says “Santa Catalina” and takes us straight to the bus… snag # 1 averted. 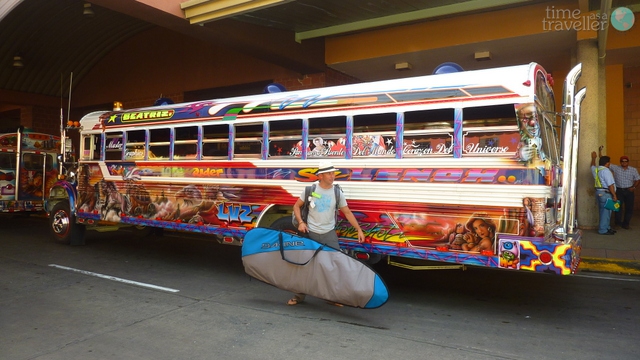 We were on our way to Santa Catalina, and our hostel in panama city had phoned ahead for accommodation at a surf spot they knew about. The only difficulty was getting there. Our plan was to take a bus 5 hours to Soná, hopefully in time for the last mini bus out to Santa Catalina which leaves at 4pm. From there we knew they’d be some sort of hike with all our gear to a neat spot up on a hill.

The 5 hour bus ride started with an assortment of Spanish dubbed action movies played on full blast from the box TV up the front, followed by latin music video clips, all of which seemed to feature a hot looking blonde female draped over a small tubby latino man playing an accordion. My iPod decided this was the perfect moment zap all battery life, and with it, mine as well. So I spent the last few hours of the bus ride feeling incredibly concerned for the small tubby latino man with the accordion, as attractive woman after attractive woman left him… I felt that if only he’d put down the acordion his luck might change. 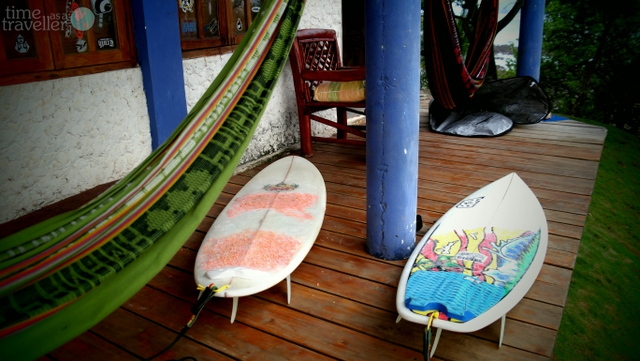 I stepped off the bus in Soná and walked straight into the face of a man who was yelling “Santa Catalina, Santa Catalina” and pointing around the corner. We took our backpacks and found the small bus. My backpack was taken from me and loaded onto the roof… I looked at it questionably… It had been a long time since my pack saw the roof of a bus like this. All of a sudden from behind me I heard an English voice cloaked in a heavy accent “Ah, you are Bryce??” we all turned around confused to see a man in a 4WD, his head sticking out the window. We fumbled out an “ahh yes??” he replied with a smile “Yes, you stay in surfers paradise?” We smiled, it was Italo, the Hostal owner. He was in town running errands and thought we might be on that bus and came to offer us a ride the next hour into Santa Catalina. Avoiding for us a 1.5 hour chicken bus ride and a long hike with our backpacks. A nice reminder of the kindness of strangers. 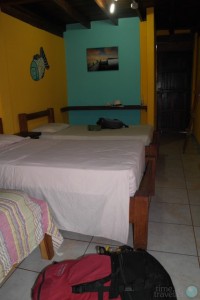 The inside of the old 4WD was missing anything that wasn’t entirely necessary for the car to function. The insides of the doors, a front window, the glove box, a door handle and so on. Bryce and I promptly fell asleep in the back as Anthony and Italo discussed the best surfing spots around, and a huge storm came in. Saved by Italo for the first time, and potential mishap with bags on roof of bus in storm averted.

Santa Catalina is a one street town… literally. There’s no atm, no taxi’s, a tiny corner store, a church and a few restaurants… and that’s it. It sits on the Pacific coast of Panama and is frequented by surfers, divers, and those looking for good snorkeling at the close by Coiba National Marine park. As we drove through town almost everyone we passed either waved or stopped to say hi to Italo, he introduced us as “his Australian friends”, it seems like the whole town loves the guy.

Hostal Surfers Paradise sits on a hill overlooking the Pacific Ocean. It’s a rustic place with all rooms looking out over a huge balcony which is lined with hammocks. The only thing separating you from the ocean is grass, a few palm trees, and a cliff edge. It was perfect. Real Remote Paradise. I remembered a review I had read on tripadvisor slating the place, someone claiming it was a rubbish place to stay because it didn’t have hot water and Wi-Fi. I stopped and looked around at our bright cosey room with ensuite and the location we were in… we were paying on $15 a night each. Yes there was no hot water (but that’s the norm in Central American hostels) and yes there was no Wi-Fi… but what is wrong with people, I thought. Paradise… real, remote paradise, does not come with hot water and Wi-Fi… it’s paradise after all. I’m not exactly a 5 star hotel kind of girl, and this was my version of a little paradise. For us this place was beyond perfect. 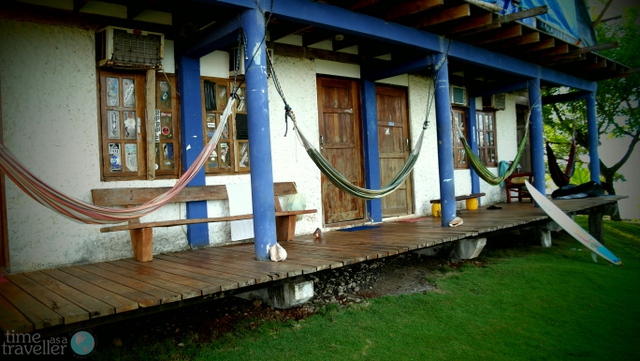 Obviously the first thing the boys did was head to the surf to test out of their new boards I walked along the dark sandy beach that, with the tide out, seemed to stretch on forever. The walk into town from the hostal isn’t lit, so that night we took our torches and headed out down the dirt track to the closest open restaurant. Just as we were about to head back after dinner the skies opened, and we were treated to a huge lightening storm. The loudest thunder I had ever heard in my life.

Day 2. I wake up and step bare foot out onto the wooden porch. Then over the grass, past the palm tree, and I stop at the edge of the hill. The ocean looked beautiful. Over breakfast Italo gave the boys the low down on where to surf and when, and we made friends with two girls who were staying in the same place.

So now, at 2pm on my first full day at Surfers Paradise I’m relaxing in my hammock overlooking the roaring ocean and slowly enjoying life. I have an irresistible urge to spell hammock with a capital ‘H’ and am listening to Bruce Springsteen tell me how I can’t start a fire without a spark. Right now I’m inclined to agree with Bruce… and I think I’ve found my spark… 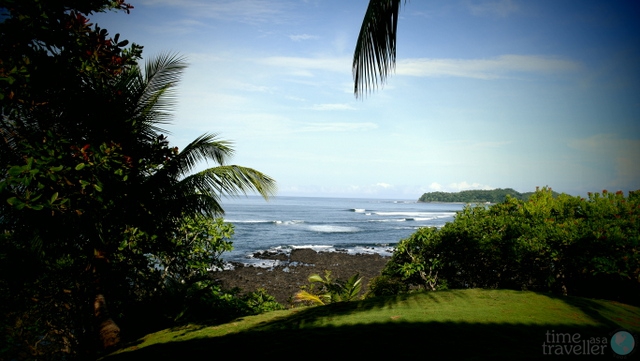 On our second night our little group of three had become five, and we headed out to a little place closer into town that made amazing fish at cheap prices and also, as we were soon to discover, played 80’s and 90’s Classic Hits music video clips. Wow. So over diner we were treated  to the perms, the stone washed jeans, and the double denim that were the 80’s and 90’s. The pinacle of which came when Mick Jagger, wearing a mauve coloured Mantard (male leotard) mixed with tight white trousers, pulled out possibly some of the best 90’s moves ever seen. After a mixture of laughter and reminiscing about groups like New Kids on the Block and embarrassing Anthony in front of our new found friends with stories of the MC Hammer pants he wore as a kid, the night slowly slid to an end. When Phil Collins started to feel soothing we decided it was time to make for the exit… 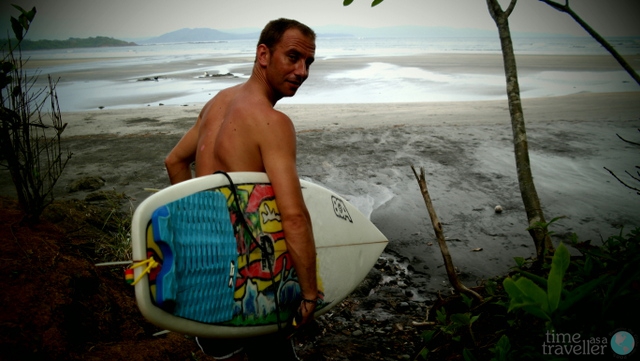 “I Caught my First tube this morning… Sir.”

Well, not quite. Rough translation. Change ‘tube’ to ‘small tumbling wave’ and think more ‘frolicking’ instead of ‘surfing’ and your on the right track. I just couldn’t resist quoting Keanu Reeves.  Point Break quotes at random intervals (irrespective of time or place) have started to become an integral part of our trip, hence Keanu had to make an appearance in the blog at some point. And today is that day.

At some point during this day we ventured into town… and realised it was damn hot. You see at our hostel there’s an amazing ocean breeze, here in the town there’s… Nothing. It’s still. No breeze to speak of… and as such it remains disgustingly hot. It was a Sunday and we were looking or lunch, and again we found nothing. Everything was closed. We later found out that it was Church day and after the church service the town got together for a bit of a party. Hence town was closed, boiling hot and closed. So our adventure into town was brief, and we walked back to Italo’s place eating potatoe chips for lunch and feeling very lucky for our ocean breeze.

I’m not entirely sure how long we spent in Santa Catalina… I suppose that’s a side effect of Paradise… you happily loose track. I have no idea the date or what day it is today, but at some point we picked up our packs and left our little haven. And of course as fate would have it, Italo just happen to be driving an hour into Soná that day to run some more errands and was only too happy to ease us the burden of our heavy packs and send us safely on our way… What a guy, What a place, What a hostel. If you ever happen to pass by Santa Catalina, be sure to stop in to Hostal Surfers Paradise, tell Italo we said hi. And thank you. 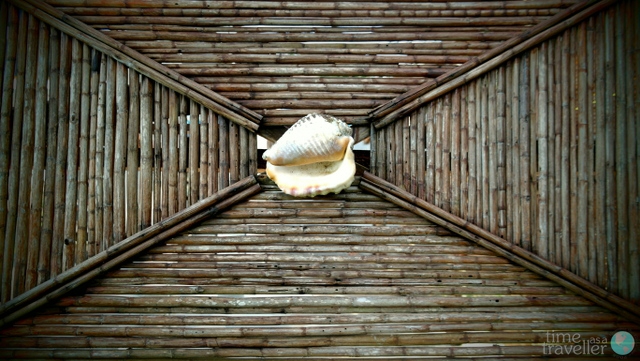 Panama City
Cartagena, By Photos
Lima, Peru – Starting Out…
My Blogging Funk… and My Virtual Saviour