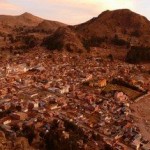 I took my first bus named Copacabana to Copacabana… how fitting. Little did I know there would be many more buses bearing this name on my South American journey.

Hostelworld only has two poorly rated hostels in Copacabana, so we decided to reach for the Lonely Planet guide which sent us to Hostal Emperador. This decision led me to question if Lonely Planet had ever actually stepped foot inside of Hostel Emperador, and taught me that sometimes you’re better off winging it than trusting the guide book’s accommodation recommendations. We stayed one night here on a mattresses made from wood then headed out to Isla del Sol.

I also had my first proper encounter with the ‘South American Electric Shower’ at this hostel (other than the brief meeting on the Inca Trail), an experience which deserves some explanation. What makes this type of shower unique is that the water is heated in the shower head… with electricity. The water is heated via live wires plugged straight into the shower head less than meter above your head. There’s also a random assortment of electrical tape in various places, which serves to provide more of a false sense of security than anything else. Then there’s the tap. If you’re lucky, the metal tap will also have electrical tape around it, and if it does remember to use it. But don’t worry too much, for safety there is generally a fuse close by to shut off the electricity just in case you get a shock… this is conveniently located inside the shower. Again, if luck is on your side this is attached entirely to the wall, but more often than not it’s hanging off the wall with live wires exposed…inside the shower. And there you have it, hot water with only a slim chance of death. I surveyed the shower on my first experience, noted all of the above, and decided that potential death was worth hot water. So I hung a t-shirt over the semi detached fuse switch and managed to have a successful shower. By success I mean that I got out alive.

In the evening we went and climbed a hill at the waters edge and saw an amazing sunset and view of the coast line of Copacabana, it was absolutely stunning.

It was in this cosy little town that our newly found kiwi travel companion turned a wee shade darker. Kiwi’s, Aussies, to me there’s not much of a difference. Some friendly rivalry, sometimes we steal their superheroes and call them ours, they make references to dingoes and babies…but that’s about it right? Usually, but apparently not always. It was in Copacabana that our new found Kiwi friend became a shade darker and decided to share with us the special ‘dislike’ he had toward Australians.

This is a story about Sam. So for privacy reasons lets call him… Sam. Sam is a New Zealander. Day 1 in Copacabana Sam tells me that all Australian women are like men… thanks Sam (Sam appears to be lacking in the social skills department). Day 2, out of the blue Sam decides to share that he thinks all Australians are racist. That’s quite a severe generalisation Sam, what makes you say that? Sam recounts the ‘White Australia policy’ (which was phased out over 25 years ending in the seventies) and a small red headed politician who owns a fish & chip shop in Northern Queensland. They’re pretty limited resources to make such a big judgment call on Sam, maybe your decision to label all Australians as racist comes from some sort of experiences you had in Australia?? Ah no, wrong again. Surprise surprise, Sam hasn’t even been to Australia. So as it turns out, not only does our new found friend Sam have the social skills of a small garden vegetable, Sam is also a bit of a wanker. World peace stops with people like Sam. Even my Kiwi travel buddy agreed that we needed to leave Sam at our earliest opportunity. Unfortunately this wasn’t until La Paz.

Leaving Copacabana wasn’t as easy as expected. We arrived back from Isla del Sol only to find there was a ferry strike. All buses were cancelled until further notice and there was no way out into Bolivia, only back into Peru. With exactly zero cash machines in Copacabana, we had limited time.

We purchased tickets to La Paz via Peru for the following day and were stuck in Copacabana only an extra night. The following day the lady we had purchased the tickets from was demanding more money, saying that the police were wanting bribes at the border and we would need to pay her for this, and she would give it them for us…. (yes, how lovely of her). That morning, along with about 40 other travellers we jumped into collectivos, bags strapped to the roof, for the 20 minute drive back to the Peruvian border. A place I thought I’d never see again.

We went back through passport control out of Bolivia and walked through the border into Peru, got on another set of collectivos, drove a few hours south through Peru, crossed another border out of Peru, waited in a queue for 2 hours with our packs in the blazing sun, finally got back into Bolivia, jumped on another small bus, strapped our bags to the roof, and drove for a further 5 hours to make it to La Paz. During the trip I was really sick and was holding back vomit most of the journey. So for me I can’t say it was the most pleasant experience, but it was quite the adventure and we were happy to make it to La Paz in a day.