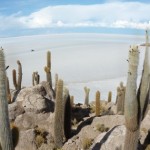 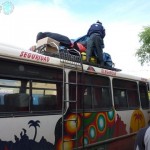 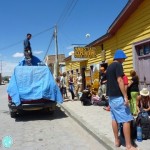 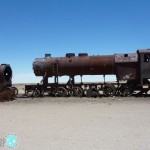 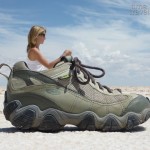 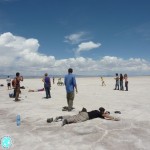 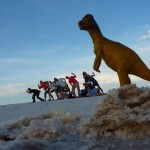 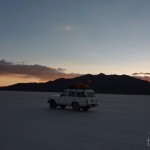 Uyuni and The Salt Flats

We drove into Uyuni on our small chicken bus from Potosi. Driving into Uyuni I noticed rubbish… rubbish as far as the eye could see scattered all through the desert. Beyond the rubbish there was a vast, barren dry landscape.

From what I’d heard about Uyuni, it’s a ‘get in get out’ scenario, so we had planned for just that. 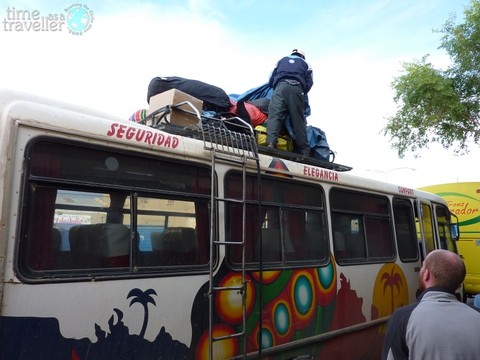 Uyuni is a tiny town in a desert area of Bolivia. There are dirt streets and not much more, which, coupled with a large amount of travellers looking for trips into the Salt Flats, makes for a pretty unique place. There aren’t many hostel options here, so when we got our gear off the roof of the bus we headed for Hotel Avenida, which we had heard was the best of not a lot of budget options. The facilities included buckets to flush the toilets but other than that it was not too bad.

As soon as we got to Uyuni we found a tour company to head out to the Salt Flats asap. Its pretty hit and miss with tour companies. We checked out a few and finally booked with Andes Salt Expeditions for a 3 day trip into the salt flats, which would drop us off at the border with Chile. They’d been recommended, are in guide books, and say that they cost extra because they don’t skip on service, have new safe vehicles including seat belts, and provide meals for special diets (gluten free, vegetarian etc), which is what we needed. 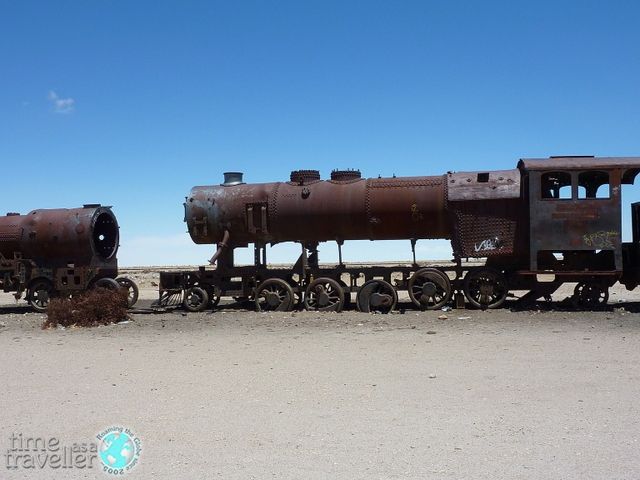 The following morning we set out in two separate trucks, our group consisted mainly of Australians and Brits. The 4WD cars were old, falling apart, had no seat belts, and the windscreen was smashed up. So, lessons on booking Salt Flats tours: 1)extra expense doesn’t equal a better deal, it just equals extra expense; 2) a referral from a guide book equals… nothing. So don’t bother. It’s pot luck. Trawl the streets and tour companies, and go with your gut feel and the people who seem the nicest, you’re equally as likely to get what you need.

Our first stop was at the ‘train graveyard’, an dumping ground of old trains in the desert which is incredible. We climbed up on the old rusted carriages before venturing into the Salt Flats for the day. It really is an incredible experience, driving through vast white plains. We stopped off in a space to take our photos, the mandatory type you see from just about everyone who’s journeyed into the salt flats, people driving shoes, jumping out of beer bottles etc. Loads of fun. And we stopped off for lunch in a restaurant made of salt.

We drove all day through the white salty plains which continued to be incredibly impressive, and toward the end of the day we stopped at ‘Fish Island’, which is a large cactus covered island in the middle of the salt plains. It had incredible views from the top, which made for some great shots. That evening we watched the sunset over the salt flats. 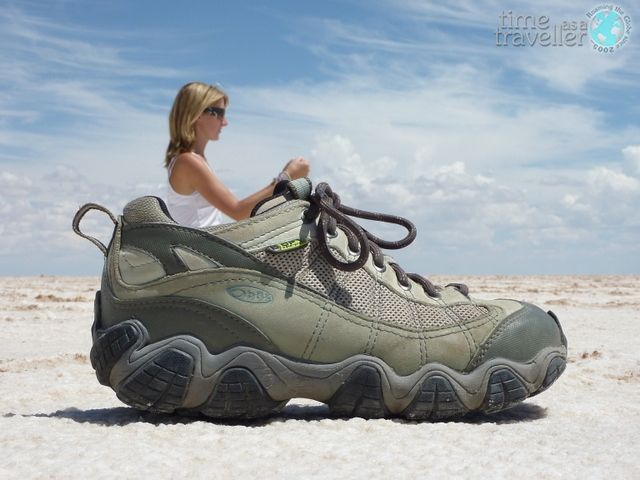 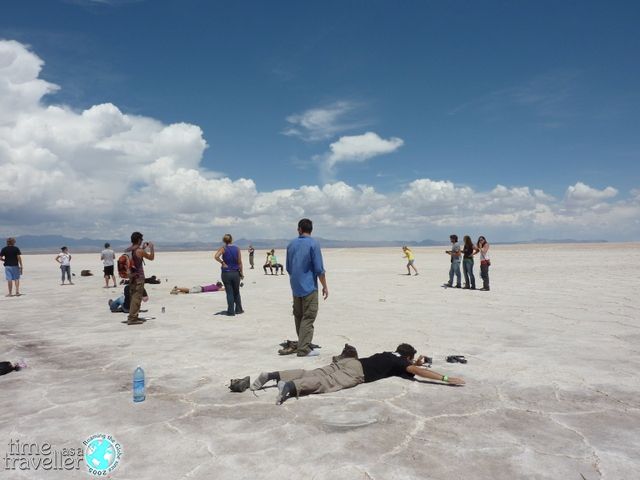 Behind the scenes, salt flats photography

The second day mainly consisted of driving through the desert. We stopped in ‘the coldest and highest desert in the world’ and at lakes filled with pink flamingos, including Lago Colorada which is a huge red lake in the middle of nowhere. Words like ‘incredible’, ‘impressive’, ‘breathtaking’, just don’t do this part of the world justice. The Landscapes are all of the above descriptives and more. It’s something you just have to see.

After a full day of driving we finally got to our final stop for the night, and cossied up in dorms together. 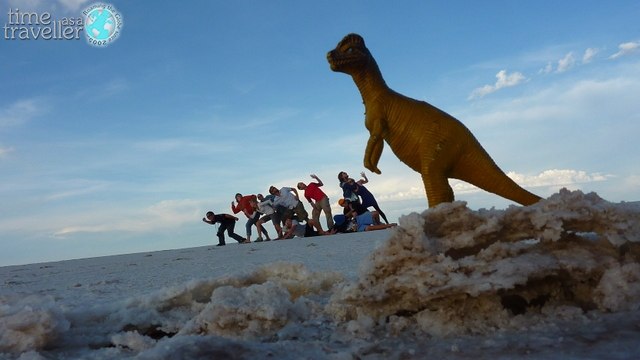 It was this night when we discovered that our tour company decided to leave the cook at home in order to fit another passenger in the car… and apparently the cook had the meals… so there was no food. Our tour guide tried to cook something up and we went to bed a little hungrier than we had expected. So I can’t say I’d recommend Andes Salt Expeditions.

Day three and I was happy to be heading for Chile. There was no breakfast and our tour guide was being an ass, but we had had an amazing time. Finding an old, half eaten, half melted snickers bar in the bottom of my pack was a life saver. We went to some thermal pools in the early morning, and plucked up the courage to get into our swimmers and jump in. And we stopped at Laguna Verde which was spectacular.

Lake in the Salt Flats, Bolivia

By 11 am five of us said goodbye to the group and headed to the border into Chile. What an experience.

Bolivia is a beautiful country and has some spectacular things to see. We had some tough dealings with the people, a lot more so than in Peru, those we encountered seemed to see us as westerners who ‘must be rich’, and people often assumed we were Americans on a 2 week vacation, rather than travellers from the other side of the world budgeting our way around the continent. Whether it be the laundry lady stealing our washing, the hostel charging us 5 times the amount for our bus tickets, the tour company taking our money then giving us no food for 3 days, or the tour guide stealing our water when we were stuck down a mine (with the exception of our tour guide and company in Rurrenabaque, they were awesome)… So unfortunately we found we had to be mindful of being taken advantage of, more so than in Peru. I suppose that’s just something you deal with as you travel, but it was unexpected, and I guess it shows that life in Bolivia is a lot tougher in comparison with neighbouring countries.

Final impressions of Bolivia, it’s a spectacular country. You must go. There’s everything you could want to see, from jungle to lakes to salt flats to bustling city.  You can adventure here until the seat of your pants literally tears right off. If you’re a budget traveller, it’s a cheaper country than its neighbours.

Just don’t be too precious about your stuff or your person, and if you are… well you’re in for some perspective. Bolivia will challenge you, and if you’re open and willing, you’ll walk away feeling like a hardened traveller.

You will leave Bolivia different to when you arrived, and in the best way possible. 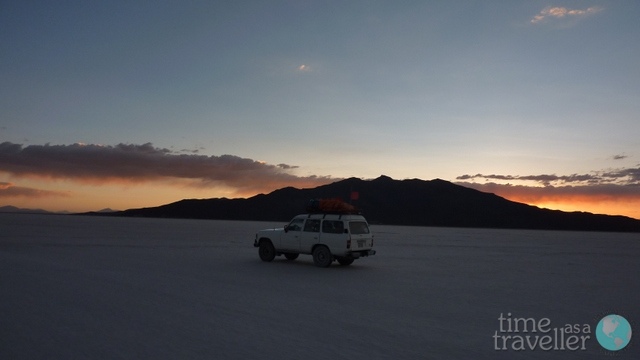