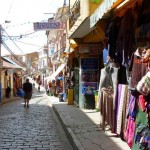 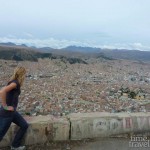 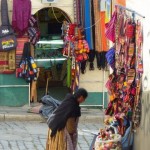 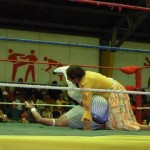 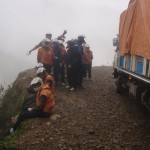 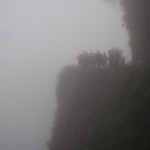 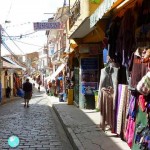 Getting Dirty in La Paz 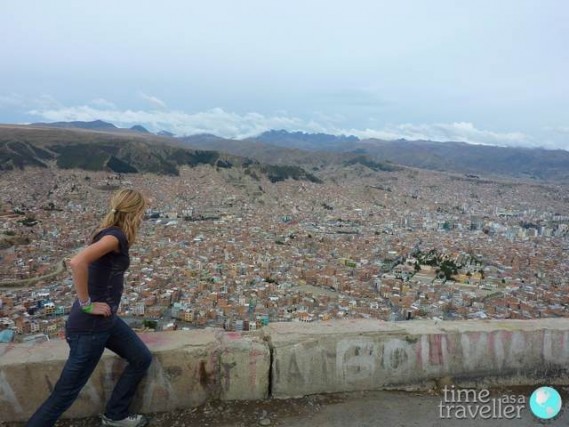 “In La Paz you will get taken for a ride” That’s what a friend told me before I left for this trip. Now I understand.

I’d go as far as saying that I’m a true believer, and that this applies to Bolivia in general. Everyone, from the hostel… to the bus company… to the laundry lady. It’s a bit like a ‘smash and grab’. If you stand out as being from a western country it’s pretty much a definite, if you’re petite and blonde you can add a little extra on top of that too, because for some reason that equates to money… I blame American movies. The only saving grace is that due to the exchange rate, you’re probably only going to get ripped off a few dollars on most occasions… although that’s only if we’re not talking about having your belongings nicked. “But this is just Bolivia, take it in your stride and roll with it” is the extra bit of advice my friend gave me. So I did just that.

I finally arrived in La Paz from Copacabana via a hefty road trip. I was sick and really glad to finally be able to stay in one place and get some rest. As it turned out, half our hostel was in the same predicament. Apparently Bolivia is the place where most get torn down with ‘the sickness’, and La Paz is the place to chill out and make it all better (which happens to coincide with over the counter antibiotics). So after two days I sent my travel buddy off to climb a mountain, and got a whole three days of chill time on my own.

I was staying in an Irish hostel called Wild Rovers, there was a smokey bar, wifi,comfy beds, and loads of drinking going on. So I found my little corner to kick back in. I made a small bunch of friends to hang out with, including a kiwi girl named Diana. The cool kids as usual, were clicky. La Paz is the first time I’ve found myself stuck in one place on my travels. Not stuck like no way out, but stuck like…. I’m comfortable… I don’t really want a way out. And this hostel was full of people who’d gotten stuck. Travellers who woke up too hung over or otherwise intoxicated to leave every morning and ended up staying for weeks on end.

As a city, La Paz is large and chaotic, as per most capital cities. At an altitude of 3660 meters it’s the world highest capital city. About half of the cars on the road seem to have black smoke pumping out of them, so adding a face full of dirty exhaust fumes to that altitude and it’s tough to walk anywhere. But when you do make it outdoors its definitely worth it, La Paz is an intriguing city. It’s the perfect place just to roam the cobbled streets and take it all in.

The witches market in La Paz is open most days, where you can buy a dried Llama foetus… just in case you happen to have run out of those. It sounds strange, and I’m not at all sure how you could humanely get so many, but apparently in Bolivia it’s considered a stylish house warming gift. From what I was told, the belief is that if you put a dried llama foetus under a new house it will give good luck… so be sure to stock up in La Paz.

Spare Sunday afternoon in Bolivia? Why not head to Las Cholitas Wrestling. This is a local wrestling event between women, men and midgets (?) and is held on the outskirts of town in what looks like an old shed. So having a spare Sunday afternoon in La Paz I went along with some friends and a bus load from our hostel to check it out. It was quite the experience. There were women wrestling men, women wrestling women, men wrestling men (not so exciting), and if you’re lucky, midgets wrestling all of the above. We didn’t get to see the midgets. It gets quite interactive, with participants throwing each other into the crowd, taking peoples drinks to throw over each other, pulling hair etc. One of the men actually grabbed an old fellow out of the crowd and threw him on the ground… he spent an hour laying there waiting for the ambulance. So be sure to choose your seat wisely. 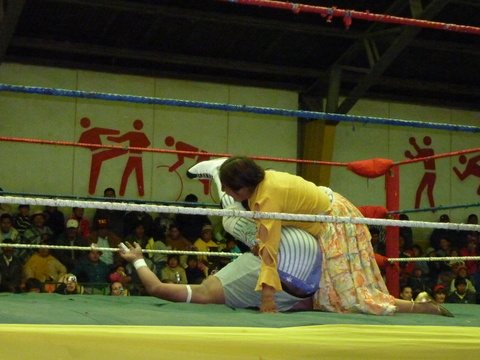 We also tried to check out San Pedro prison (from the book Marching Powder) which strangely is a nice pink building in the middle of town. When we were there there was no chance of bribing the guards any more, so no chance of doing a tour everyone talks about. So we settled on taking pictures with a zoom lens from the park over the road.

Then there’s Death Road, or El Camino de La Muerte. This road is about 69km long and goes from La Paz to Coroico. This ‘one lane dirt track’ use to be a major road. It has drop off’s of more than 600 meters, no guard rails, gets loads of rain and fog, and was once used for two lane traffic. That’s quite the recipe. It’s well known for it’s death count of an estimated 200 – 300 people yearly, hence the name. Due to the sizeable death toll, the government finally built another major road due, so now it has very limited traffic and tour companies send travellers flying down it on bikes. Go figure. So, being good travellers we decided to embark on the mission. Apparently 20 something people have died over the years when their bikes have gone over the edge, but after facing death under a raft on the Zambezi River in Zimbabwe and jumping out of a plane in Namibia, I thought this would be a good one to add to the list of brilliantly stupid death defying things I’ve done. 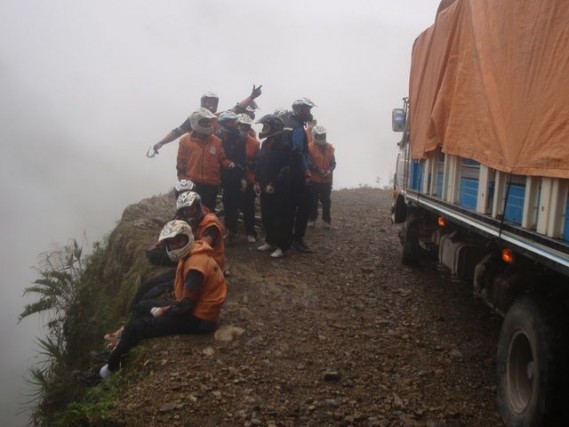 We signed up with Vertigo, the second most expensive company, in the hope of coming out alive. I picked up my little beating heart, put on my helmet, and got on my bike. The tour company gave us the safety spiel, “go as slow as you want, we’ll wait for you” lalala. Which made me feel safe and secure… until our group gunned it down the mountain, and anyone who was slow was left behind… that was me. Not that it bothered me, while the two aussie boys at the front were pulling out tricks, I was checking out the views from the back and practicing my Spanish swear words as I skidded around corners. I was at the end the whole way, little me… alone… well except for a tour guide and an English girl who was riding along behind me talking to herself and trying her hardest to catch up with the cool kids out front. She finally fell off her bike and ended up in the van the whole way down. (*Note to self to continue to enjoy own company). 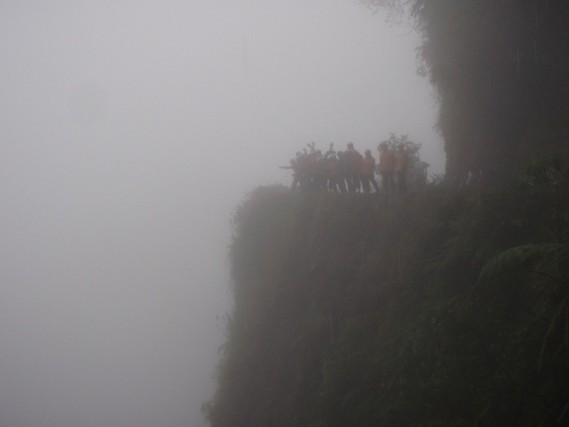 I finally made it down to the bottom of death road, in one piece. I was an hour early and only 10 mins behind the crazy guys out front, so I was happy with that and savoured my position of final place as a win-win to life itself. All in all it was a fantastic day trip, not as tough as I thought it would be, and I can definitely recommend going with Vertigo.

Leaving La Paz and heading to our next stop Potosi was an experience in itself, but you’ll have to stay tuned for that… 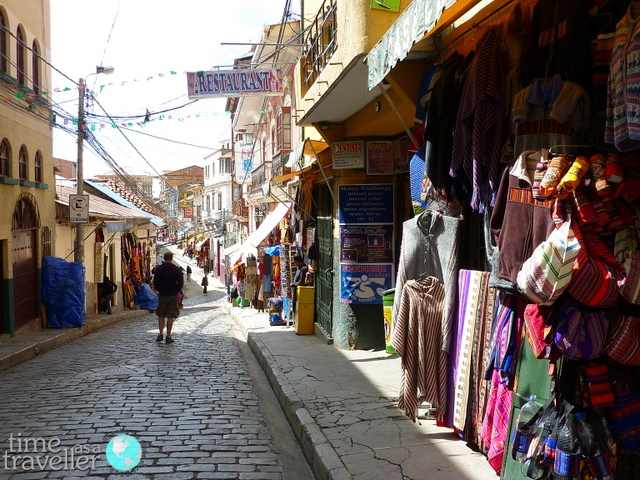